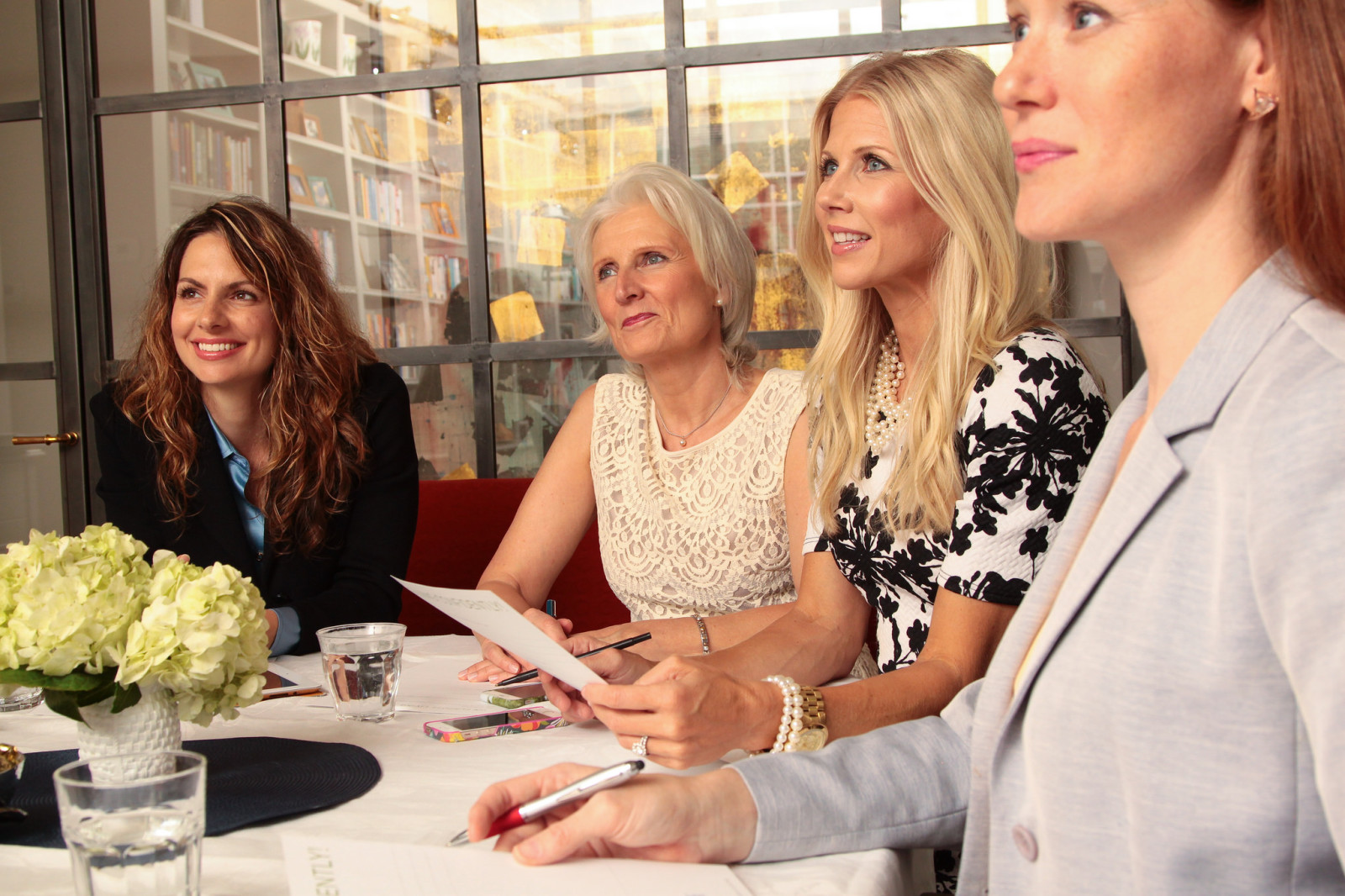 Meet Della Moya (praying for the event at left!) who was the City Leader for Inspiring Generous Joy (now WDW Signature Event) in Albuquerque!

How did you hear about Inspiring Generous Joy (now WDW Signature Event) (IGJ)?

I was very new in my position at National Christian Foundation in New Mexico (NCF). I decided to look through the types of events our affiliate had held over the past several years. I realized there had never been a one-day event for women. I thought it would be great to have something like this that wouldn’t be very time consuming and wondered if some of the other NCF offices around the country might have held something and contacted a few of my colleagues. I didn’t quite have a handle on what it should be. Then I heard about a fairly new upcoming IGJ event that was going to be held in Houston that would be sponsored by Women Doing Well and cosponsored by Generous Giving and NCF Houston. It was only four days away! Although I never like traveling alone, I left for Houston.

I had never attended anything like it. I was at a table toward the back of the room and I was very observant of everything going on around me. I loved the way I saw the women interact with each other. There was harmony. There was all this loud buzzing of excitement you could hear as the women mingled prior to the opening. As I listened to the speakers throughout the day I heard the statistics currently related to women in the world and learned how important women are to Jesus, how God intentionally made women naturally generous at heart, about biblical generosity, the different types of generosity, and about God creating us for a specific and individual purpose. The personal testimonies and the panel of women from the community who discussed and gave examples of how generosity is for them were really good. The breakout boutiques were awesome. I knew immediately that I wanted to bring IGJ to Albuquerque! On the ride from the event to the Houston airport to return home my excitement started to fizzle out because the enemy was telling me that it couldn’t happen and intimidated me with worry about what it would cost to do this. I suddenly felt defeated.

So, what did you do?

Two days after I got home, I was awakened at 4:00 A.M. like if I were being nudged on the shoulder. Suddenly all these one-line tasks were coming into my mind regarding what I should do. I kept thinking, “Am I dreaming”? I was afraid I would forget all the things I was hearing, so within a two-hour period, I think I left myself about 50 different voice messages at work so I would remember. I quickly realized that the Holy Spirit was talking to me! Bottom line, God told me: “Don’t worry about the cost. Don’t worry about the venue. Invite 150 women and I will fill the room. You proceed as if it is all approved. I’m going to do it all.”

No! This was a first for me. I became a believer February 2005 and I used to ask people, “How do you know it is the Holy Spirit talking to you? Why doesn’t He talk to me?” Of course now I know He usually does but sometimes we just don’t listen. I definitely knew it was God talking to me that morning. He was so very specific. He put so much joy and enthusiasm in me about proceeding. I had never coordinated an event of this size before! The way everything flowed you would have thought I have done this for years. It was unbelievable.

What did you do next?

This is important. The next morning I went to work and told my boss that the Holy Spirit told me that I was to proceed with the event regardless of the cost because He would take care of the cost, the sponsors, the venue, and would fill the room. I basically talked nonstop for approximately 20 minutes. My boss just looked at me and when I was done he said, “Ok”. So he also took a leap of faith. He respects and knows very well the work that Women Doing Well and Generous Giving do.

I started by calling on about 30 of the wives of some of our NCF donors and inviting them to lunch, my treat. I told them because I was new to the position I wanted to get to know them and that I was also planning an event for the women of Albuquerque and I wanted to get their perspective on whether they thought it would be a success. Talking to people I don’t know is kind of out of my comfort zone because I am naturally shy. But God filled me with just the right words and with such excitement that everything just naturally came through as if I was very much in my comfort zone. Boom, boom, boom! All I had to do was tell them what my personal experience was at the event in Houston. (I even told them how glad I was that I didn’t wear jeans, since we are so casual in Albuquerque and in Houston they really dress up! They all laughed and knew what I meant.) Each woman I met with told me that they could see that the Holy Spirit was working in me and that it was because of that and my enthusiasm that they wanted to be involved. Each agreed that this would be great for Albuquerque.

Twenty-six of them became Igniters, nineteen became Table Sponsors, one became my Prayer Team Leader and she recruited seven prayer team members. We sent out 168 invitations and had 165 attendees! I had never done anything like this so when I heard that 20% usually decline. I was shocked! We were all surprised. God kept His promise.

WOW! What did you do to prepare for IGJ?

We had a Journey of Generosity (JOG) for the Igniters a few months before the event. We had 24 women attend. I heard JOGs are very relational and wasn’t sure what to expect. I was nervous and thought: Am I going to have to spill my guts? After our facilitator set the tone and put our hearts in a perfect place, I personally allowed myself to become very transparent. Since this was a retreat I had planned, I (the shy one) even raised my hand to say something first. I shared with the group intimately about how I had been in the past and that that the “old” selfish, stupid and rebellious Della, who I couldn’t stand, was dead, and that the “new” Della was reborn. From there on, each individual opened up, sharing things that were heavy on their hearts and we were each touched by something someone else had said. Women are so relational. Trust was built. We laughed. We cried. We hugged. We expressed love. We felt hopeful. And most of all it ignited excitement and joy. It created a bond between us all beforehand and became an important part of the overall plan.  Every woman in that room was different, yet we were all so similar because God made us that way. It was so touching, amazing and special. I told the ladies that I could see Jesus hovering over the room during the first evening and He had his arms wrapped around us saying, “Well done my daughters, well done.” I get the chills when I recall it all.

What did you do the day of the event?

I decided that I would greet each lady at the door as they arrived and thank her for coming and spending a Saturday with us and wished them a wonderful experience. Women Doing Well does a wonderful job of setting up the venue. It was so beautiful and feminine and made the women feel so special, from the tablecloths to the flowers. Attention was being paid to each woman and they knew it! I watched from the back. Again there was laughter, crying, enthusiasm and there was joy. It was so touching and inspirational. They responded like I did in Houston: Wow, I don’t discuss giving with my husband. Wow, I can do more. My heart was deeply touched. God had me here for a purpose. I needed to hear these messages. I know what my next step is.

What kind of response did you get from the women who attended?

They loved it! They wished we had tissue at each table because they were so touched by God’s generosity towards them. Many of them said that they have attended so many conferences and events over the years that they don’t like to attend them anymore but they attended because their table sponsor, said “Trust me, you don’t want to miss this event.” So basically they took a leap of faith and were so happy they did because it was one of the best and most organized events they had ever attended. It was so absolutely wonderful for Albuquerque.

What are some of the tangible results of IGJ?

New relationships were formed. Old relationships were rekindled. Twenty-four women expressed interest in attending a Journey of Generosity retreat and several would like to have their husbands to attend couples JOG. Four people opened a giving fund at NCF. One friend is working on getting the message into the local Catholic diocese. We are watching the teenage daughters of some of the Igniters really embrace the message. I wish I had heard about the biblical message of generosity at their age. There were numerous other things that transpired and many examples of generosity that occurred after the event.

What advice would you give to someone considering becoming a City Leader?

Definitely that the City Leader should attend an IGJ event prior to planning one of their own and if possible they should take their Prayer Team Leader with them. It becomes contagious and you can’t fake enthusiasm. Pray about each woman whom you’re going to consider as an Igniter and that God leads you to the right person to approach for a Prayer Team leader. One of my Igniters led me to the woman who became our Prayer Team Leader. The Prayer Team is critical. Building bonds with my Igniter Team became so personal for me. As the team was formed, prayer became a matter of habit for each of us for months prior to our event. We prayed about everything possible we could think of. They were always on my heart so I communicated with them frequently through email. This was definitely a blessing for our city.

God spoke. I obeyed. He delivered! I’m not as shy anymore. I’m 62 years old and I feel like God grew me up through this process. I go to the Lord for all of the big stuff but I tend to forget that I should go to Him first for even the smallest of details. This entire process has really brought me to a closer relationship with Christ. The whole thing made such an impact on my life. I don’t think I will ever forget any detail of this amazing journey.  I definitely that I am now a “woman doing well”!