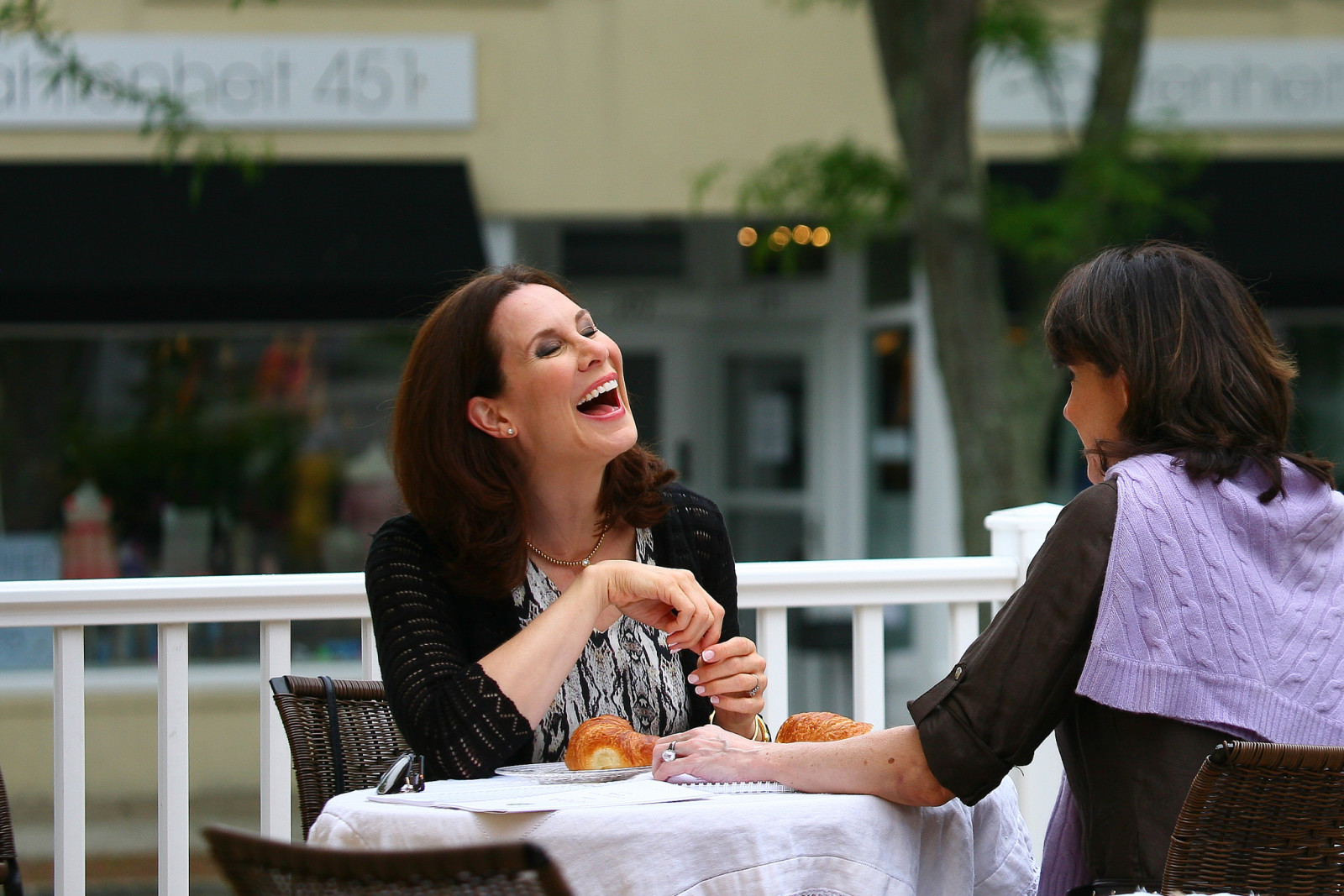 When the story is told of the founding of Biola University in Los Angeles, somehow the “founding before the founding” is left behind. As it turns out, before Union Oil Company’s Lyman Stewart and pastor T.C. Horton initiated the Bible Institute in 1908, their wives Lula and Anna were pounding the pavement in Southern California. In one report, the ladies and their women leaders (at left) visited more than 6,000 homes, sharing the gospel and asking about interest in Biola. In essence, paving the way for a new Christian college.

“Everybody talks about 1908. We have shirts that say 1908,” says Greg Leith, director of strategic alliances. “But it all started in 1907–with women’s rallies and Bible classes in evangelism.”

More than 100 years later, Greg hired Women Doing Well’s Ann McKusick (at left) to help Biola focus on women during their $180 million capital campaign. They studied the women’s donors’ programs at nearby University of Southern California and Chapman University, two private schools within 30 minutes of Biola. They considered trends concerning women and finances:

And they studied their own donor profiles:

“No matter where we looked,” says Greg, “we saw women.”

So, Biola joined in the first-ever survey on Christian women and giving. Biola donors participated in Women Doing Well’s research to bring the total surveyed to more than 7,000—the largest survey ever done in any field of philanthropy.
The results codified what many in development already believed: Christian women are generous. And they want to be more generous, but they face some common hurdles.

The key findings in the GIVING SURVEY suggest:

Although Ann McKusick of Women Doing Well had worked with women’s philanthropy for two decades, the survey highlighted a tremendous opportunity to help women grow in generosity. “I hadn’t thought about the elements that contribute to a generous woman—knowing her purpose, passion and plan,” says Ann. “That’s the revelatory piece for me. These things are learnable and transferable. We have a real opportunity to develop tools that fit the hand of a woman.”

In the fall of 2012, Greg and Biola’s Co-director of Ruby Women Kristen Hahn (at left) decided to hear more from their female donors and invited 22 of them to talk further. They presented the Women Doing Well findings and asked for the donors’ feedback. Eighteen of them were so ready to help that they agreed to design a plan based on their desires to engage with Biola. Led by Kristen, 12 joined a leadership team made up of alumnae, parents, board members, faculty and friends of the university. Together, they built a program around four pillars:

LEARN:Learn and grow in the area of your passions, purpose, gifts, strengths, biblical stewardship, practical finances, and giving decision-making.

GIVE:Give to young leaders so the cost of their education does not stop them from launching their dreams to reach the world for Jesus Christ.

TRAVEL To see what God is doing through effective Biola leaders locally and around the world.

And the key, they said, was they wanted to do it together. Was it a surprise that the Biola donors of all ages and experiences wanted to collaborate? “No,” says Kristen, “I am a woman. I know that together we can accomplish a lot more.”

This new, strategic and generous group named themselves “Ruby Women: A Ministry of Biola University” after Proverbs 31:10.

This new, strategic and generous group named themselves “Ruby Women: A Ministry of Biola University” after Proverbs 31:10, describing the value of a woman of noble character.

In the fall of 2012, co-directors Kristen, Maria Zalesky and the Ruby Women leadership team began to design engagement experiences around the four pillars. For the LEARN pillar, they hosted a half-day seminar on Faith, Family and Finances. One hundred fifty women came to hear about developing a family mission statement, estate planning, leaving a legacy, and preparing a financial foundation led by Women Doing Well.

Ruby Women also capitalized on partnerships. With Generous Giving, they hosted 14 leaders in a Journey of Generosity (JOG) weekend. And with Saddleback Church, 260 women joined them to learn about the inner lives of men, featuring best-selling author Shaunti Feldhan. Ruby Women has archived all these learning messages, now with well over 1,000 online viewings.

The SERVE pillar projects include volunteering with local Los Angeles organizations to assist women in need, and mentoring women students during the Biola school year. “I believe strongly in the impact a mentoring relationship can have,” says Heather Hoerdemann, chairperson for the Mentoring Committee, “not only on students but also on those that invest the time in mentoring.” Twenty-five Ruby Women now mentor women students.

The GIVE pillar encourages Ruby Women to help Biola students through 10 scholarships this year and an International Hospitality Fund that helped 10 international students and five graduate families get started at Biola with dorm and apartment necessities. “The Ruby Women Leadership Team shopped and personally selected the items,” says Maria. “They love the ‘hands-on’ exercise in generosity.”

The TRAVEL pillar was a surprise to some in the development office. “Who knew women wanted to travel together to see what God is doing around the world?” asks Greg. But he’s been thrilled that Ruby Women are coming along alumnae in boardrooms, classrooms and the mission field. Ruby Women’s first trip to Sri Lanka (see below) was led by first lady of Biola Paula Corey. “We went to an orphanage run by a Biola grad,” says Paula, “I like to bring women to participate, not just go and see. Women like that. They like being useful, not just touring around.” Another trip is planned for Denmark with Paula, as well as a few stateside trips.

People are taking notice of what is happening with Ruby Women. “Biola is a great example,” says Women Doing Well’s Pam Pugh, “of what can happen with intentional involvement with women donors. We want to live for something that will outlast us.” With less than two years in existence, Ruby Women was awarded the Council for Advancement and Support of Education’s (CASE) Gold Award for fundraising. This secular award put Biola at the top where people take notice. “The CASE award is a validation for us that Biola is at the forefront of higher educational institutions’ programs for women,” says Maria.

And other Christian colleges want to learn from the early success of Ruby Women. At the recommendation of Women Doing Well, Colorado Christian University sent a team to Southern California to see first hand Biola’s success. “We really enjoyed the collaboration with our Colorado visitors,” says Kristen, “and are so happy to pass on our experiences and assist them in their [endeavor].” Now CCU is in process of creating their own program with the help of Women Doing Well.

Clearly, women are engaging in new ways and enthusiasm is burgeoning. But the question for some about bottom-line giving remains to be seen. Can you measure the worth and beauty of a ruby? Greg seems unconcerned: “Our renewed focus on women doesn’t have to prove itself, because when you look back at the data, it says that 40 % of our giving was already from women, 60% of our mailing list is women, 65% of estate giving is from women. The appropriate God-directed focus on women should have been here all along. And if we do it well, we will fan the flames to an even higher level.”

All you need to do is look at the history and infrastructure of Biola and it screams out, ‘Women!’”

“Look at the buildings on our campus” suggests Greg. “The Crowell School of Business, funded by Susie Crowell. The Moats Lecture hall, funded by Virginia Motes. The Fluor Fountain, funded by Marjorie Fluor Moore. All you need to do is look at the history and infrastructure of Biola and it screams out, ‘Women!’”

How can you get involved?